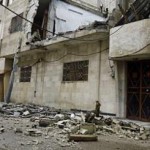 While the Iranian government denied that the trucks in question were carrying chemical weapon materials, it should be noted that in 2011 Turkish authorities had intercepted two previous arms shipment from Iran to Syria. One of those shipments was an Iranian plane carrying automatic rifles, rocket launchers and mortars.

However, the finding of chemical weapons material in the Iranian trucks — which comes as the embattled regime of Syrian President Bashar Assad edges closer to complete collapse — has renewed fresh concerns over the future security and control of Syria’s vast stockpile of chemical weapons.

Similar fears were raised during the collapse of the Libyan regime of Muammar Gadhafi. In that case, the United States and its NATO allies worked with Libyan rebel forces to monitor Libya’s known chemical-weapon facilities and prevent Gadhafi’s forces from seeking to use or divert chemical-warfare materials.

However, while Western efforts to secure Gadhafi’s chemical weapons and transfer their control over to Libya’s transitional governing authority have gone relatively well, that may not be the case with Syria if the Assad regime falls.

According to Leonard Spector of the James Martin Center for Nonproliferation Studies, there is “a huge difference” between the Syrian and Libyan chemical-weapons programs, citing Syria’s program as considerably larger, more sophisticated and equipped with both production and delivery capabilities.

In fact, even though it has refused to become a member of the UN’s Chemical Weapons Convention and submit to international oversight, Syria is still widely believed to have one of the most extensive, if not the largest, chemical weapon arsenals in the world

Moreover, that arsenal, which began its development in the 1970s under then-President Hafez al-Assad as a threat against Israel, has continued to grow unabated under Bashar Assad.

To that end, the Syrian regime is reported to have at least five facilities dedicated to its chemical weapons program at al-Safira, Hama, Homs, and Latakia; two munitions storage sites at Khan Abu Shamat and Furqlus; and a chemical-weapons research laboratory near Damascus.

The Syrian chemical arsenal reportedly comprises hundreds of tons of sarin, mustard gas, and the deadlier VX nerve agent. Those blister and nerve agents have been fitted as chemical warheads on Syria’s long-range Scud-B and Scud-C ballistic missiles. In fact, the Syrian government recently armed its medium-range Scud missiles with 600 one-ton chemical warheads.

In addition to its ballistic missile component, the Syrian government reportedly also has tens of tons of sarin agent and mustard gas stockpiled in conventional artillery shells, rockets and bombs.

So now, besieged by mounting threats to his regime’s survival and armed with that lethal weaponry, questions arise as to whether Assad will use his chemical weapons against Syrian protesters and army defectors; against a possible armed international intervention; or divert them to terrorist groups in the region.

Launching chemical attacks against Syrian civilians would certainly engender little surprise, given Assad’s already bloody crackdown on Syrian protesters and the fact his father, Hafez al-Assad, reportedly used cyanide gas in his repression of the 1982 Syrian uprising in Hama.

Equally less surprising would be if Assad delivered his chemical weapons to an outside terrorist organization, especially given recent reports from Western intelligence indicating that long-range surface-to-air missile systems and long-range missiles have been moved out of Syria by the Islamist terror group Hezbollah. The missiles include dozens of Syrian-manufactured M600s, which have a range of approximately 300 miles and can carry a half-ton warhead.

The unsettling prospect of facing Hezbollah’s 42,000 missiles and rockets, now potentially loaded with chemical weapons, comes as Israel’s Home Front Command announced only days ago that it will run out of gas masks within months, leaving 4 million Israelis (nearly 45 percent of Israel’s population) without protective kits.

That partnership reportedly led the United States to develop undisclosed contingency plans in case the Syrian regime was seen preparing to use chemical weapons or pass them on to terrorist organizations.

Of course, Assad may not be the one to determine how his chemical weapons are ultimately used if Syria’s chemical weapon armories — many located near current or recent sites of unrest — are seized by Syrian rebels and militant Islamist groups.

That scenario comes ever more apparent as intensive fighting between the Free Syrian Army (FSA) — an estimated force of 15,000 military defectors — and the regular Syrian army has now reached the outskirts of Damascus.

The possibility of the Syrian government losing control of its chemical weapon arsenals, however, doesn’t appear imminent according to US State Department spokeswoman Victoria Nuland who has said the United States “believes that Syria’s chemical stockpile remains under government control and that there is no change in the lockdown status of those weapons.”

That assessment, however, may soon change as the Israeli Defense Force recently announced that it was making preparations for the imminent fall of Assad. According to Israeli Defense Minister Ehud Barak, Assad “won’t see the end of the year. I don’t think he will even see the middle of this year.” Then, according to the head of Israel’s military planning division, Major-General Amir Eshel, “The big question is what’s going to come the day after.”

Until then, while it remains to be seen if the Syrian regime is prepared to use its chemical weapons, an indication of its intentions may be found in a report that Russia recently sent 3 million gas masks to Syria, masks which have already been distributed to the regime’s remaining loyalists.