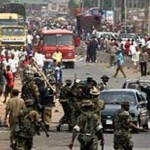 The Islamist terror group Boko Haram’s escalating war against Christians and a violent nationwide protest against the end to government fuel subsidies have brought Nigeria to the edge of civil war.

Boko Harem began its current escalation with the Christmas Day suicide bombing of St. Theresa’s Catholic Church in Niger state, an attack which killed over 50 people.

The bombing of St. Theresa induced Nigerian President Goodluck Jonathan on December 31 to place the Muslim-dominant northern Nigerian states of Borno, Yobe, Niger and Plateau — areas that have been witness to most of Boko Haram’s attacks — under emergency rule.

For its part, Boko Harem responded to the emergency declaration by issuing a 3-day ultimatum to southern Christians living in the north of Nigeria to leave. When the ultimatum’s deadline expired, Boko Harem members subsequently killed over 60 Christians in gun and bomb attacks.

In the process, a Boko Haram spokesman let it be known that the Islamist group’s deadly reach wasn’t confined to a specific geographic region, saying, “We can really go to wherever we want to go.”

To prove that point, most of the killings took place in locations not placed under emergency rule, murders which included more than 30 Christians gunned down at two church services in Adamawa state and six people killed during a church service in Gombe state.

At the same time it was engaged in its Christian killing spree, Boko Haram claimed responsibility for the assassination of Modu Bintube, a member of parliament from Borno state; opened fire on customers at a local beer hall in Yobe state, killing eight civilians and four policemen; detonated bombs at a police station in Gombe state; and attacked a police headquarters and robbed and burnt two banks in Yobe state.

Nevertheless, Nigerian General Onyeabor Ihejirika claimed that Nigerian security forces and counter-terrorism units had brought the security situation in the north “under control.”

Of course, Christians may be skeptical about the Nigerian government’s ability to protect them from the Islamist killers, given that in 2011 alone Boko Haram murdered over 500 people, most of whom were Nigerian Christians, including over 130 who were killed in one attack in November 2011 in the northeastern Nigerian city of Damaturu.

Moreover, Boko Haram doesn’t seem to be losing its appetite for waging jihad. That fervor was on display recently when Boko Haram leader, Imam Abubakar Shekau, declared in his first ever televised appearance that Boko Haram was “at war with Christians” and that its fighters “will continue to kill and are ready and willing to be killed themselves as martyrs.”

So, given all that, it wasn’t too surprising then to hear Nigeria’s Christian leadership no longer willing to turn the other cheek to Boko Haram’s genocidal activities. That resolve was issued by Ayo Oritsejafor, head of the Christian Association of Nigeria, who called the killing of Christians by Boko Harem “systematic ethnic and religious cleansing.”

As such, Oritsejafor urged his followers to “do whatever it takes” to defend themselves against “these senseless killings,” adding, “We have the legitimate right to defend ourselves.”

Oritsejafor’s comments were echoed by Saidu Dogo, the secretary general of the northern branch of the Christian Association of Nigeria (CAN), who simply said, “Enough is enough!”

Apparently, some of the followers have received the message as reprisals against Muslims have already begun. In the past several days alone, the Egbesu Fraternity, a southern Nigerian ethnic militia, has given Muslims two weeks to leave the Niger Delta region, while attackers in the southern Nigerian city of Benin burnt a mosque, killing five people and leading to the displacement of over 10,000 Muslims from the city.

It should be noted, however, that Christians aren’t the only ones in Nigeria who are fearful of the threat posed by Boko Haram.

In a recent speech honoring the country’s military dead, President Jonathan warned that Boko Haram presented Nigeria with its “greatest security challenge,” one that is potentially “even worse” than the country’s 1967 Biafra civil war, a conflict which lasted three years and claimed more than a million lives.

Moreover, Jonathan then publicly acknowledged for the first time that the severity of the Boko Haram threat was compounded by the fact the terror group had found a supportive following among Nigerian government and security officials.

Unfortunately, Boko Haram isn’t the only Islamist terror group the Nigerian government has to fear given a newly released UN report that stated “growing concern” about possible linkages between Boko Haram and Al-Qaeda in the Islamic Maghreb (AQIM).

It should be noted that the UN may be the only group unaware that Boko Haram has already acknowledged an alliance with AQIM — as well as Somalia’s al-Shabab — and has credited the two al-Qaeda linked groups with helping it carry out increasingly sophisticated and deadly attacks, such as car bomb attacks and the use of suicide bombers.

Nevertheless, the UN revelations prompted the Nigerian government to close its borders with Chad and Cameroon.

Yet, while Boko Haram may have brought Nigeria to the edge of civil war, violent nationwide protests against the Nigerian government’s January 1 decision to end government fuel subsidies may push the country off the cliff.

Despite being Africa’s top oil producer, government officials have argued that the fuel subsidies, which cost the Nigerian government more than $8 billion a year, are not only economically crippling but could be better used to improve roads and electric power grids, hospitals and schools.

However, the removal of the fuel subsidies led gas prices to instantly double, setting off a storm of protest in a country where most of the population lives on less than $2 a day. To that end, Nigerian unions have launched a nationwide strike while thousands of protesters have clashed in the streets with Nigerian police, leaving several dead and scores wounded.

To date, President Jonathan has not let the public protests sway him into reinstating the fuel subsidies. Of course, as one Western investment banker said, “The government doesn’t have a choice because the fiscal cost associated with the subsidy is unsustainable. It’s going to become unbearable.”

Given a raging Islamist insurgency, Christian genocide, and possible economic collapse, Nigeria may have already reached that point.