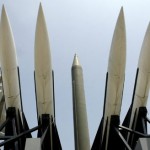 A classified briefing given in November to congressional leaders by officials in the Obama administration revealed that North Korea is in the process of building its first road-mobile intercontinental ballistic missile, an ICBM capable of striking the continental United States.

North Korea’s primary strategic missile — the long-range Taepodong-2 intercontinental missile — is a fixed-site ICBM with a range of up to 9,300 miles. However, the road-mobile ICBMs, which are more difficult to locate on radar and thus easier to hide, can be set up and launched much more quickly than fixed-site missiles.

It is believed the new mobile ICBM is an adaptation of the North Korean Musudan mobile intermediate-range missile, already deployed by North Korea and reportedly capable of reaching American military bases in Okinawa and Guam.

Needless to say, the development of a North Korean nuclear-armed mobile ICBM, according to a military analyst with the International Assessment and Strategy Center, would pose “a spectacular challenge” to the United States.

Of course, it should be noted that the news of North Korea’s pursuit of a mobile ICBM has long been acknowledged by the Obama administration.

In January 2011, then-Defense Secretary Robert Gates said that the North Koreans’ pursuit in developing a road-mobile ballistic missile posed “a huge problem,” adding “As we’ve found out in a lot of places, finding mobile missiles is very tough.”

Gates’ belief that North Korea is in the process of becoming “a direct threat to the United States,” was echoed in a recent statement issued by Republican Ileana Ros-Lehtinen, chairman of the House Foreign Affairs Committee.

Ros-Lehtinen wrote, “As the North Korea threat grows, so do other threats. North Korea is a legendary proliferator and you can be certain that the regime will not keep its technological advances to itself, but share with the likes of Iran and Syria.”

Not surprisingly, despite being under UN sanctions for conducting nuclear tests in 2006 and 2009, North Korea has continued to share nuclear technology with other nations, assistance which includes setting up nuclear production and testing facilities in both Syria and Iran.

So, given that North Korea is now adding to its ballistic missile arsenal – already estimated to number over 1,000 medium-and long-range missiles — it prompted several Republican lawmakers to write Defense Secretary Leon Panetta expressing concerns that the Obama administration immediately “correct its priorities regarding the missile defense of the homeland.”

Those misplaced defense priorities have been on glaring display in the Obama White House’s efforts to respond against an array of growing long-range missile threats from China, Russia, Iran and North Korea.

For starters, in September 2009 the Obama administration cancelled a proposed ground-based midcourse defense (GMD) missile site based in Czechoslovakia and Poland. Begun by the second Bush administration, that system was designed to provide additional protection to the US homeland from long-range Iranian nuclear missiles that are estimated to be operational by 2015.

Since then President Obama has, among other things, reduced the planned number of GMD interceptors in Alaska and California from 44 to 30 and cancelled both the Kinetic Energy Interceptor (KEI) and Multiple Kill Vehicle (MKV) long-range missile defense programs.

Most disturbingly, the New START nuclear arms reduction treaty between the United States and the Russian Federation, pushed by the Obama White House and ratified by the US Senate in December 2010, recognizes the linkage between reduction of strategic offensive arms and the restriction of antimissile defense systems, a position the Russians have sought for years.

As such New START imposes an array of restrictions on American missile defense options, restrictions which include limiting the American option of converting its strategic offensive missile launchers into defensive interceptors.

That policy shift is currently on display as the United States and NATO are locked in a battle with Russia over the deployment of a Europe-based missile system consisting of 24 interceptor missiles based in Poland and Romania and an advanced radar system located in Turkey.

While that defense system is designed to defend Europe’s NATO members from potential missile attacks launched from outside Europe, in particular from Iran, Russia has objected to its deployment, fearing the system will be used against its own ICBMs.

The Russians, however, may not be the only ones prepared to quash the Europe-based missile system.

Specifically, Congress, locked in deficit reduction talks with the Obama administration over a mandate beginning in 2013 to reduce the federal deficit by $1.2 trillion over 10 years, may be sympathetic to pulling the plug on a missile system aimed at primarily defending Europe.

As Kurt Volker, ambassador to NATO during the George W. Bush administration says “A missile defense system for NATO? It’s going to be hard to keep people committed if they think the US is picking up the tab for Europe.”

Nevertheless, according to Secretary of State Hillary Clinton, the United States and NATO are prepared to deploy the missile defense system, arguing that no country outside of the NATO alliance will have a “veto over whether NATO protects itself by building a missile defense system against the threats that we perceive are the most salient.”

Perhaps given its relentless pursuit to acquire nuclear missiles capable of reaching the United States, Mrs. Clinton may want to extend those “salient threats” to also include North Korea.