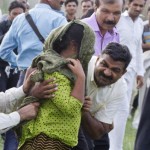 After being acquitted in January 2013 of blasphemy charges, Pakistan’s Supreme Court has now reopened the case against Rimsha Masih, a 14-year-old Pakistani Christian girl believed to suffer from mental disabilities.

Rimsha’s case had drawn international attention as well as corresponding outrage after the young girl was arrested  at her home in August 2012 and charged with blasphemy upon being accused by a Muslim neighbor of allegedly burning pages from a Koran.

It should be noted that running afoul of Pakistan’s notorious blasphemy laws can earn sentences of death or life in prison for those convicted of desecrating Islam’s holy book or insulting its Prophet Muhammad.

For her part, Rimsha, who worked as a maid at the time, denied through her attorney any blasphemous wrongdoing, claiming she was simply burning garbage and “did not know a Koranic book was among the papers because she cannot read.”

Moreover, Pakistan’s Minister for National Harmony, Paul Bhatti, said that given Rimsha’s mental disorder, it was unlikely the young girl had “purposefully desecrated the Koran.”

Unfortunately, Rimsha’s illiteracy and mental impairment were not persuasive enough arguments in which to prevent Pakistani police from incarcerating the young girl for the alleged heretical act.

Yet, in September 2012, Rimsha’s case seemingly took a turn for the better when Pakistani police arrested a local Muslim cleric, Hafiz Mohammed Khalid Chishti, and charged him with planting the burned Koranic pages in an effort to frame Rimsha.

According to a police official Chishti “put pages into the ashes, showed them to the people of the area, and gathered them to attack the girl’s house.”

Those charges were corroborated by three officials from Chishti’s mosque who told a judge that Chishti’s attempt to incriminate Rimsha was part of a broader plan by the cleric to oust Christians living in the poor Mehrabad neighborhood of Islamabad where Rimsha and her family lived.

Of course, that revelation most likely raised few eyebrows given that Pakistan’s blasphemy statutes are often used and abused to either settle personal scores or as weapons in which persecute religious minorities, such as Christians, Hindus and Ahmadis.

Still, the officials testified that they had urged Chishti to not go through with his plan, efforts which apparently had little effect on the Imam who reportedly replied, “You know, this is the only way to expel the Christians from this area.”

Unfortunately, Chishti’s plan almost worked to perfection.  Soon after the accusations were levied against Rimsha, an angry Muslim mob numbering in the thousands gathered outside Rimsha’s house, where they threatened to burn down Christian homes in the neighborhood if police did not arrest the young girl.

To that end, over a thousand Christians in the area were forced to flee their homes, seeking shelter in church compounds or sleeping outdoors, a move which at the time, according to the head of a Pakistan-based human rights group, was “the largest reallocation of Christians from any area of Pakistan.”

To this day, many of those same Christian families have yet to return to their homes, fearful of Muslim reprisals. Included in that exiled group is Rimsha, her parents and relatives, all of whom have been in hiding since Rimsha was released on bail in September 2012.

Rimsha’s flee to safer confines was certainly understandable given that in Pakistan, those accused of blasphemy, more often than not, never see their cases settled by a Pakistani court but instead are forced into hiding or killed by mobs before they even stand trial.

Since 1990 at least 60 Christians accused of blasphemy have been killed extra-judiciously by enraged Muslim mobs or individuals.

For his part, Chishti, who has been out on bail since October 2012, has denied the allegations levied against him. Moreover, the prospect of Chishti paying any judicial price for his misdeeds seem fairly remote given that the witnesses who testified against him have since recanted their statements.

Despite that, the case against Rimsha appeared to have been settled in November 2012 when the Islamabad High Court (IHC) dismissed the blasphemy charges against her, finding that there was no evidence that she had been seen burning the Koranic pages.

Rimsha, however, was still not out of the Pakistani judicial woods as shortly after the IHC ruling, the neighbor who had initially accused Rimsha of blasphemy, Malik Ammad, filed an appeal to Pakistan’s Supreme Court, claiming that “the police had shown bias in investigating the charges against Rimsha.”

Yet, in January 2013 Pakistan’s Supreme Court upheld the IHC decision when it voted to acquit Rimsha of all charges of blasphemy, a decision which presumably ended all further legal challenges in her case. As Rimsha’s attorney, Tahir Naveed Chaudhry, said at the time, “The SC’s decision has put an end to future contentions on the case.”

As for the fate of Rimsha and her family, Chaudhry said “we will now seriously consider relocating them to some other city so that they can resume their normal lives now that the case has reached its logical end.”

Unfortunately, that pronouncement has been proven woefully premature as the Pakistani Supreme Court voted at the end of March to reopen the case after receiving an appeal from a police investigator who claims he “was pressured by the government to drop charges against her after an international outcry.”

So now Rimsha Masih once again faces the prospect of life in prison for a crime she clearly did not commit, a fate that perhaps only a deafening international outcry can prevent from happening.