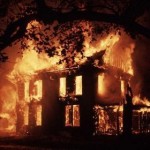 In the latest act of bruising intolerance being perpetrated by Muslims against Pakistan’s besieged Christian community, a Muslim mob recently burned down over 150 Christian homes and two churches over allegations that a Christian man had committed blasphemy.

The rioting, which occurred in the Pakistani city of Lahore, began after a Muslim man accused Sawan Masih, a Pakistani Christian, of insulting the Prophet Muhammad, an allegation punishable by death under Pakistan’s blasphemy laws.

Even though Pakistani police had swiftly arrested Masih, Christian families nevertheless hurriedly fled the area in fear of Muslim reprisals, an exodus which proved fortuitous given the ensuing Muslim rampage.

Once the mob’s fury had been spent, Christians slowly made their way back to their burned-out homes, leaving one Christian surveying the destruction to lament, “Nothing is left here. I don’t know why this happened.”

The answer to that question, unfortunately, is exceedingly clear given the type of barbaric treatment routinely meted out by Muslims to those Christians and other religious minorities unfortunate enough to run afoul of Pakistan’s notorious blasphemy laws.

Those statutes, first introduced in 1986 by Pakistani military dictator Muhammad Zia ul-Haq, can earn sentences of death or life in prison for those found guilty of insulting Islam’s Prophet Muhammad or desecrating its holy book, the Koran.

To that end, 20 Pakistanis convicted of blasphemy are currently serving life sentences while another 16 are sitting on death row awaiting their appointed date with the executioner.

Among those currently slated to die is Younis Masih, a Christian father of four who has been on death row since 2007 and Asia Bibi, a Christian mother of five, who in 2010 was the first Pakistani woman convicted for blasphemy and sentenced to death by hanging.

Younis Masih’s heretical act occurred in September 2005 when he was arrested after he had reportedly asked a group of Muslims who were holding a religious service one evening in a nearby house to turn their music down.

Bibi’s transgression against Islam came in 2009 after a verbal disagreement with some Muslim women in her village led Bibi to claim that Christians and Muslims are equal before God, an affront apparently stinging enough to lead to her being accused of having blasphemed against Mohammad.

It should be noted, that while Muslim nations throughout Africa, the Mideast and Asia — such as Sudan, Saudi Arabia and Iran — have similar blasphemy laws, few enforce those laws with the zeal of Pakistanis.

Perhaps that fervor stems from the fact that under Pakistan’s blasphemy laws the burden of proof required to convict someone is exceedingly weak given there are no guidelines as to what constitutes blasphemy, no evidentiary standards, and no requirement to prove intent.

Moreover, Pakistan’s blasphemy laws also contain no provisions to punish a false accuser or false witness. As a result, the laws are often used to settle personal scores rather than to defend against perceived slights to Islamic piety

In fact, the Muslim rampage in Lahore reportedly had less to do with offending Islamic sensibilities than it had to do with personal score settling. According to a bishop in Lahore, Masih’s Muslim accuser had levied the blasphemy charge against Masih the day after the two men had gotten into a fight while drinking.

Perhaps not surprisingly, those accused of blasphemy, more often than not, never see their cases settled by a Pakistani court but instead are forced into hiding or killed by mobs before they even stand trial.

Since 1990 at least 60 Christians accused of blasphemy have been killed by enraged mobs or individuals, extra-judicial justice perhaps best explained by the fact many Pakistani Muslims believe killing a blasphemous person earns a heavenly reward.

While Pakistan’s religious minorities, such as Christians, Hindus and Ahmadis, have been the disproportionate targets of blasphemy allegations, Muslims who violate the blasphemy laws aren’t immune to mob reprisal.

For example, in December 2012 several hundred Muslims in the Pakistani province of Sindh dragged a man suspected of burning pages of the Koran from police custody, where they summarily beat him before then burning him alive.

That display of Islamic tolerance was preceded in July 2012 when Ghulam Abbas, a 40-year-old mentally impaired Muslim man, was accused of burning a copy of the Koran in the Pakistani city of Bahawalpur.

Incited by local Muslim clerics, a mob numbering in the thousands stormed the police station where Abbas was being held, whereupon they dragged Abbas to the spot where he purportedly desecrated the Koran, poured gasoline over him, and then burned him to death as he screamed for help.

So given all that it’s not terribly surprising that Pakistan’s religious minorities, as well as some Muslims, are attempting to amend the blasphemy laws, efforts which can carry some deadly consequences.

In 2011, two Pakistani Christian politicians attempting to repeal the blasphemy laws were assassinated: Punjab Governor Salman Taseer, the only Christian minister in Pakistan’s Cabinet, was shot and killed by one of his own guards; two months later Shahbaz Bhatti, the Minister for Minority Affairs, was gunned down by Islamists.

Yet, there are those in Pakistan who contend that tentative signs are emerging that signal a weakening of support for the blasphemy laws, change prompted in part by the international outrage generated by the case of Rimsha Masih.

Rimsha, a 14-year-old Pakistani Christian girl afflicted with Down syndrome, was arrested in August 2012 after she had been accused by a local cleric of burning 10 pages of the Koran.

Rimsha, who worked as a maid, denied any blasphemous wrongdoing, claiming through her attorney that she was simply burning garbage and “did not know a Koranic book was among the papers because she cannot read.”

Nevertheless, Pakistani police quickly brought Rimsha into custody, persuaded less by her illiteracy and mental impairment and more by a swelling Muslim mob gathered outside her home bent on torching the entire Christian community if the young girl was not immediately arrested.

Yet, while imprisoned, the cleric who accused Rimsha was himself arrested and charged with planting the burned pages, the result of which led Pakistan’s Supreme Court in January 2013 to acquit Rimsha of all charges of blasphemy.

Then, shortly after Rimsha’s acquittal, Barkat Masih, a Hindu who had converted to Christianity and spent 18 months in prison after he was accused of blasphemy in 2011, was acquitted in February 2013 by Pakistan’s Supreme Court and released.

Finally, in March, Karma Patras, a 55-year-old Christian pastor charged in October 2012 with blasphemy, was released on bail as he was awaiting his trial because his accuser had acknowledged that he had mistakenly accused Patras of committing blasphemy

Still, while that decision was a stunning rarity given that victims of false accusations of blasphemy are usually denied bail, Patras is still mired deep in the Pakistani judicial woods.

Specifically, an accuser cannot drop the charges once they have been filed, so Patras will still have to stand trial, where if convicted he will face up to ten years in prison.

Moreover, being granted bail may not be the act of judicial mercy it appears to be on the surface given that after his arrest, Muslims in his village tried wrest Patras from police custody. Failing that, the mob settled instead on forcing his five married sons and their families to leave the area by threatening to burn them alive.

Tragically, for Pakistan’s Christian and other religious minorities, that Muslim bellicosity is more than a menacing threat but a terrifying reality come to fruition.