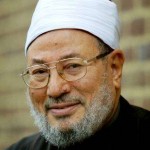 Sheikh Yusuf al-Qaradawi, host of a popular Al Jazeera television show and a highly influential Islamic cleric with a long history of poisonous views toward women, homosexuals and Jews, has now sanctioned the killing of those who leave Islam.

The 86-year-old Egyptian-born cleric, who has been called the spiritual and intellectual leader of Egypt’s Muslim Brotherhood, aired his enlightened views on the deadly Islamic punishment for apostates on a recent broadcast of Shariah and Life — his long-running program that enjoys an estimated worldwide audience of 60 million viewers.

Qaradawi addressed his Al Jazeera viewers, quoting from a series of Koranic verses and hadiths, which read in part, “The punishment of those who wage war against Allah and His apostle is that they should be murdered or crucified…Kill whomever changes his faith [from Islam]…”

Moreover, according to Qaradawi, Islam’s diligent use of executing apostates had served to ensure Islam’s survival since the 15th century, telling viewers that “If they had gotten rid of the apostasy punishment Islam wouldn’t exist today.”

Unfortunately, Qaradawi’s on-air fatwa carries some considerable weight given his standing as one of the most influential Sunni Muslim clerics in the world, prominence gained as host of Shariah and Life, founder of the popular website IslamOnline and author of over 100 books on Islam.

Yet, while Qaradawi has studiously over the years tried to posit himself as the tolerant face of Islam, his efforts have been belied by his long-standing endorsement of, among other things, wife beating, Palestinian suicide bombers, and the killing of homosexuals and Jews.

For starters Qaradawi believes it acceptable under Islam to punish disobedient wives by using them as human speed bags, having once said that while beating a wife is “neither obligatory nor desirable” it is “acceptable as a method of last resort – though only lightly.”

For those who may be unclear as to what Qaradawi defines as “lightly,” one can reference his 1984 book, The Lawful and Prohibited in Islam, in which he wrote “a husband may beat his wife lightly with his hands, avoiding her face and other sensitive areas.”

That enlightened view was offered by Qaradaw in 2004 when he was asked if raped women were punished under Islam, to which he opined:

While Qaradawi may eye beatings and rape as acceptable Islamic consequences for improper feminine behavior, his views on the consequences for being a homosexual or a Jew are far more deadly.

In 2004 Qaradawi wrote a fatwa on IslamOnline that offered burning or stoning as an acceptable punishment for those who practice homosexuality, adding, “While such punishments may seem cruel, they have been suggested to maintain the purity of the Islamic society and to keep it clean of perverted elements.”

Not surprisingly, Qaradawi holds Jews in the same esteem, views he clearly expressed on Al-Jazeera in 2009 during the Gaza when he said: “Oh Allah, take this oppressive, Jewish Zionist band of people. Oh Allah, do not spare a single one of them…Oh Allah, count their numbers, and kill them, down to the very last one.”

If Allah isn’t available to kill the Jews, Qaradawi has endorsed utilizing suicide bombers to accomplish the task, a position he expressed in a 2005 BBC interview in which he said:

Allah Almighty is just; through his infinite wisdom he has given the weak a weapon the strong do not have, and that is their ability to turn their bodies into bombs, as Palestinians do…I consider this type of martyrdom operation as an evidence of God’s justice.

In fact, Qaradawi’s fondness for suicide bombing includes utilizing women as human projectiles, a position he articulated in a 2004 fatwa posted on his IslamOnline website, in which he wrote: “The committed Muslim women in Palestine have the right to participate and have their own role in jihad and to attain martyrdom.”

Though Qaradawi’s theological viewpoints may be par for the Islamic course, his disturbing message offers a small glimpse into the type of hate-filled programming that may become standard viewing fare for Americans when Al Jazeera America begins broadcasting into the United States this summer.

That unnerving prospect became a looming reality in January when Current TV co-founders Al Gore and Joel Hyatt engineered the sale of the leftist American news channel to the Qatar-owned Al Jazeera news channel for a reported $500 million.

For their part, Gore and Hyatt had rejected earlier offers from conservative Glenn Beck to buy Current TV because reportedly they felt who “the network goes to is important to us and we are sensitive to networks not aligned with our point of view.”

Of course, that should come as little surprise to those few who have watched the rogue’s gallery of leftist ideologues, crackpot entertainers and ex-Democratic politicians who have populated the airwaves of Current TV, luminaries such as Keith Olbermann, Joy Behar, Eliot Spitzer, and Jennifer Granholm.

Nevertheless, Hyatt and Gore did manage to find an ideological soul mate in the Al Jazeera news channel, an attraction, according to Hyatt, which rested on the fact that “Al-Jazeera was founded with the same goals we had for Current.”

That compatibility aside, for now it remains unclear if Sheikh Yusuf al-Qaradawi will be accepted as part Al Jazeera America’s future on-air talent pool. What is far more certain, however, is that his hate-filled message would be more than welcome.