Savage Escalation in the War on Afghan Women 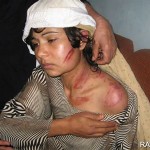 Violence against Afghan females is rapidly escalating in both frequency and savagery, its latest victim a 14-year-old girl named Gastina who was nearly decapitated with a hunting knife for refusing a marriage proposal from her 25-year-old cousin.

Gastina was walking to her home in Afghanistan’s northern Kunduz province when she was attacked by her cousin Sadeq and another male relative, both of whom proceeded to break her hands and feet before slitting her throat nearly to the bone.

Gastina’s ghastly death sentence was carried out because her family had reportedly turned down Sadeq’s repeated marriage requests, claiming Gastina was too young for marriage. That rebuff was apparently so stinging that it necessitated Sadeq brutally murder the young teenager.

It should be noted that such horrific acts of violence are unfortunately the norm throughout Afghanistan’s highly patriarchal society, where cultural and religious tenets have long allowed most Muslim men to treat women and girls little better than human chattel.

As such, Afghanistan has been named the “world’s most dangerous country in which to be born a woman,” a nightmarish hell where nearly 90 percent of women and girls have reportedly experienced some form of “physical, sexual or psychological violence.”

Yet despite that disturbing misogynistic track record, Afghan government officials and human rights activists have found that the violence levied against woman and girls is reaching, even by Afghan standards, terrifying new heights. As an official with Afghanistan’s Ministry of Women’s Affairs recently said, “The violence is more severe than in previous years.”

That severity was documented by Afghanistan’s Independent Human Rights Commission (AIHRC), which recorded over 4,000 cases of violence against women and girls in 2012 — 550 cases in September alone — a nearly 25 percent increase from 2011.

These acts of violence include “domestic violence and abuse, torture, beatings, physical mutilation, murder, and rape.” Perhaps most disturbing, AIHRC found that 80 percent of the cases involved girls under 18.

In the past two months, these acts of barbarism include a 20-year-old newlywed in Heart province beheaded by her in-laws for refusing their demands that she become a prostitute; a 16-year-old girl in Ghazni province publicly whipped over 100 times for allegedly having an affair; a woman in Herat stabbed to death by her husband for seeking work outside the home; and a 20-year-old woman in Badakhshan province who was imprisoned for several months in the home of a married couple who sexually abused, beat and tortured her.

While the cause that sparks these individual acts of brutality may vary, the one common theme that joins them is the involvement of family members in the majority of the cases.

To that end, the Afghan Ministry of Women’s Affairs found that more than 50 percent of the victims in the nearly 500 cases of violence against women the department registered in 2012 were a result of domestic violence.

An offshoot of that familial violence also includes women and girls killing themselves each year to escape failed, and often violent, forced marriages. These marriages more often than not come complete with a torrent of physical and emotional abuse issued from the bride’s husband and family.

As such, these desperate women and girls will flee their matrimonial hell through an assortment of gruesome means, such as taking rat poison or insecticides, hanging themselves, and even self-immolation.

In fact, some girls don’t even wait around for the nuptials to take place. Such was the case in November 2012 when a 17-year-old girl named Farima tried to escape her impending forced marriage by jumping from her apartment building, a fall in which she survived, but broke her back.

For its part, the Afghan government has said that despite the spike in gender-based violence, it has taken proactive steps, often citing the Elimination of Violence Against Woman law (EVAW). The EVAW, which was enacted in 2009, criminalizes such things as child marriage, forced marriage and domestic abuse.

Yet, not everyone agrees with that assessment. For starters, a UN report in November 2011 found that the EVAW act was rarely enforced, citing as an example the 2,299 crimes reported in 2010, of which only 155 cases, or just 7 percent, were prosecuted.

That lack of judicial zeal may stem from the fact that when Afghan women do seek help from Afghanistan’s courts and police, they are often pressured by authorities to withdraw their complaints, or failing that, find themselves arrested and jailed for committing “moral crimes.”

As one human rights activist has said, “The government’s failure to effectively enforce the 2009 law on elimination of violence against women encourages men to believe that they can kill and attack a women with impunity.”

Not surprisingly, that impunity has given an increasingly large number of women and girls precious little hope that their viscous maltreatment will end anytime soon.

That sentiment was perhaps best expressed by a young woman named Kamela, who was first married off to a 35-year-old man when she was 14. That marriage ended shortly after their wedding when he found out she had been sexually abused by her cousin, a transgression which caused him to terminate the marriage.

Upon returning home, Kamela’s father, his familial honor now “disrespected,” brutally beat Kamela before locking her in a barn, only to free her four months later after he sold her to a 78-year-old man for $30,000.

As Kamala said, “People are usually aggrieved with other people, but I am aggrieved at God. It would have been better if He hadn’t created me in the first place if I was fated to live with so much suffering. Is there anything other than death that can help me?”

Sadly, it’s a tragic question being asked by an ever increasing number of Afghan women and girls.