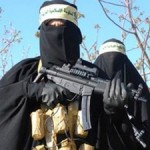 Islamist terrorists have long used women as suicide bombers, but now their combatant role has expanded with al-Qaeda’s formation of an all-female jihadist fighting unit whose primary mission is purportedly to attack Coalition targets in Afghanistan.

The discovery of the all-girl military group, dubbed the “Burkha Brigade,” came to light in a recent online video that showed a bevy of fully covered women firing off a wide selection of heavy weaponry, including machine guns, assault rifles, and rocket-propelled grenades.

The women enlistees are thought to have been recruited from Chechnya, the semi-autonomous republic in the Russian Federation and a state which has long provided fertile ground for producing female jihadists.

That disturbing history was most notably on display in 2002 when bomb-strapped Chechen women were among 50 Islamist militants who held over 800 people hostage in Moscow’s Dubrovka Theater. In that assault nearly 130 civilians were killed.

While Muslim women, dressed as males, have in the past fought alongside Islamist militants, the creation of an all-female fighting force adds a new twist in the escalating use of women combatants by al-Qaeda, the Taliban and other Islamist terror groups in the region.

Yet, while the overall use and effectiveness of the all-girl fighting brigade remains unclear, it is likely that its formation will not eclipse the feminine combative role most favored by Islamist terrorists: suicide bomber.

That terrifying function is, unfortunately, ideally suited for women given Islamic restrictions against searching females. Those taboos often allow Muslim women to hide explosive-laden suicide vests underneath their burqas and pass undetected through security checkpoints.

It should be noted that while women are highly valued by jihadists as human projectiles, children and the mentally impaired used in that same capacity are equally prized by Islamist terrorists.

The Taliban, in particular, has a predilection for utilizing youthful suicide bombers given that nearly ninety percent of the estimated 5,000 suicide bombers trained in Pakistan are under the age of 16. As Pakistani Taliban commander Qari Hussain once explained, “Children are tools to achieve God’s will, whatever comes your way you sacrifice it.”

However, not to be outdone, al-Qaeda has shown an appreciation for utilizing the mentally impaired for its suicide operations. Al-Qaeda in Iraq energetically used this tactic when it employed mentally handicapped women, many with Down Syndrome, to carry out suicide attacks against American and Coalition forces during the Iraq war.

Nevertheless, the use of women as human explosives has gained growing admiration among Jihadist circles. This admiration has been evidenced since 2010 by the growing swell of al-Qaeda and Taliban-run suicide training camps along the Afghan-Pakistan border designed to specially train female bombers.

Included in the deadly curriculum is instruction on how to wear suicide vests, carry bomber bags, and drive bomb-laden vehicles. This latter activity was on display in September when a camp graduate drove her car, packed with 400 pounds of explosives, into a bus in the Afghan capital of Kabul, killing 12 people.

For its part, the Taliban alone has employed female suicide bombers in Afghanistan and Pakistan at least eight times in the past two years. These suicide attacks included bombings in Afghanistan’s Kunar Province that killed two US soldiers in June 2010 and 12 American and Afghan troops in June 2011.

Not surprisingly, the Taliban employs no age requirement for becoming human ordinance. One horrifying example of this barbarity occurred in 2011 when Afghan Taliban fighters in Uruzgan Province handed an eight-year-old girl a bag of explosives which prematurely detonated, killing the child before she could reach her intended target.

For some women, joining the ranks of suicide bombers is a voluntary affair, one borne out of true jihadist fervor, a promise of a heavenly reward, or simply a need to avenge the deaths of their husbands and brothers lost in battle.

Others, however, need a nudge toward self-slaughter, often egged on by militant clerics, scholars and others who stress a woman’s responsibility to participate in jihad includes being employed as a human incendiary device.

One of those encouraging people is Omaima Hassan, wife of al-Qaeda leader Ayman al-Zawahiri, who in 2009 issued a seven-page letter posted on Islamic websites to her “sisters in Islam,” in which she described how Muslim women could assist their men with jihad.

In addition to helping ‘to preserve the mujahedeen in their sons, and homes, and…to help them raise their children in the best way,” Hassan said women could also go the extra mile and participate themselves in “martyrdom missions” as suicide bombers.

Apart from personal appeals, websites and publications have also arisen to issue the clarion call to female jihadist activism, the most notable being the on-line magazine Al Shamikha, better known as “Jihad Cosmo.”

Al Shamikha, which debuted in March of 2011, is dedicated to the up-and-coming female jihadist, a journal which offers an eclectic mix of beauty and fashion tips intermixed with guidance on how to attract, marry and care for a mujahedeen fighter.

In the unfortunate event, however, a woman can’t find Mr. Right, Jihad Cosmo urges alternative routes, such as becoming a martyr for the Islamist cause, advice which it says “the believer will gain security, safety and happiness.”

Yet, despite all those persuasive efforts, most female suicide bomb recruits, tragically and unsurprisingly, are unwilling participants, dragged to the Jihadi cause through abduction or coercion.

For example, in June 2011, the Pakistani Taliban kidnapped an eight-year-old girl and attempted to force her to carry out a suicide attack against a group of Pakistani soldiers. Fortunately, the plot failed when the young girl, strapped in a suicide vest, was able to warn off the troops, who in turn defused her vest.

During the Iraq war, al-Qaeda in Iraq ordered the rape of women as a way to fill its suicide bomber ranks. Since a raped woman is viewed in many Muslim societies as having brought shame to her family, the terrorists would then coerce the defiled woman into believing her familial dishonor could be erased by her martyrdom.

So, given all that, the formation of the female Burkha Brigade should engender little surprise as it just represents the next logical step in the Islamist’s unending war on women.