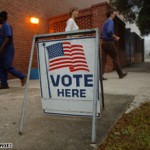 The Democratic Party’s categorical opposition to fair elections has just hit a new, but unsurprising, low. A high-ranking official with Congressman Jim Moran’s re-election campaign was recently caught on video encouraging an undercover reporter to forge documents in order to cast phony ballots in the upcoming Virginia election. The incident is particularly compromising for Congressman Moran, as he has been a vocal opponent of the state’s voter ID law, which is designed to protect against voter fraud. More hypocritically, Moran had been previously caught on film demanding that constituents show their IDs at a local town hall meeting.

Patrick Moran, son of Democratic Virginia Congressman Jim Moran and field director of the congressman’s reelection campaign, was forced to resign after the video was made public. Moran’s transgression was captured in a conversation he had on video with an undercover investigative reporter with Project Veritas, a conservative nonprofit group investigating election fraud in the United States.

The undercover reporter had approached Moran, asking him how he could cast votes on behalf of nearly 100 Virginia residents he knew were registered but who weren’t planning to vote in the upcoming election.

Virginia voter ID law, which does not require photo identification, instead allows voters to cast ballots by providing substitute documents, such as paychecks, library cards, utility bills, and bank statements.

Yet, despite the fraudulent request, Moran counseled the reporter that while there would be “a lot of voter protection” at the polling places to enforce the ID laws, the plan would work if he produced a “utility bill or bank statement…Bank statement would obviously be tough…but faking a utility bill would be easy enough,” adding, “You’d have to forge it.”

Moreover, Moran was also quick to advise that if a problem arose at a polling place, the reporter needn’t worry because his back would be covered by “an Obama for America lawyer, or another Democrat lawyer…on hand to provide help…You’ll have somebody in house, that if they feel that what you have is legitimate, they’ll argue for you.”

Of course, that advice comes as little surprise as the Department of Justice has been working overtime the last several years to strike down or delay from taking effect newly passed state voter ID laws, even though the Supreme Court has upheld the constitutionality of such laws since 2008.

For his part, Moran denied that he had engaged in “any sort of illegal or unethical behavior.” In fact, Moran chalked the incident up to his playing along with a reporter who he thought was just “joking” around, noting, “I should have immediately walked away, making it clear that there is no place in the electoral process for even the suggestion of illegal behavior, joking or not.”

Not surprisingly, James O’Keefe of Project Veritas had a different view, arguing that “Patrick Moran doesn’t respect the integrity of our elections. He would rather win by fraud than risk seeing the political positions of his father, Barack Obama… rejected by the legitimate voters of Virginia.”

Unfortunately, the lack of respect for electoral integrity is not confined to Patrick Moran but to large swaths of the Democrat Party, which have been vigorously opposing voter ID bills, maintaining they serve to suppress the votes of minorities, the elderly, and the poor.

Moreover, they argue that forcing someone to produce a photo ID in order to vote is not only racist, but marks the return of Jim Crow. As Virginia Democratic State Senator Mamie Locke responded to the passage of Virginia’s voter ID law, “This bill –and others like it — is so 1866.”

Of course, if that is true, then also apparently racist are current photo identification requirements for all Americans that include cashing checks; opening a bank account; boarding airline flights; purchasing firearms; driving automobiles; buying alcohol and tobacco products; renting/buying property; purchasing prescription drugs; applying for food stamps; applying for welfare; applying for a bank loan; applying for a job; and using a credit/debit card.

Thus, despite liberal objections, voter photo ID laws have engendered widespread bi-partisan and bi-racial support, evidenced by a 2011 Rasmussen poll which found that 70 percent of likely US voters believe that voters “should be required to show photo identification such as a driver’s license before being allowed to cast their ballot.”

Among those who don’t share that view is Patrick Moran’s father, Congressman Jim Moran, an 11-term Congressman from Virginia’s 8th District, who has been strenuously opposed to Virginia’s voter ID law.

In fact, Jim Moran’s distaste for election integrity was such that in September he and 15 other Democrats co-sponsored a federal bill that proposed allowing voters to simply sign an affidavit attesting to their identity if they did not possess the required voting identification documents.

It should be noted, however, that while Jim Moran may believe that producing proper ID should not be a prerequisite for voting, it’s certainly a prerequisite when it comes to connecting with him, given his highly publicized town hall meeting in 2009 over Obamacare in which he demanded those speaking in opposition present their IDs before asking him a question.

Ironically, however, the resignation of his son over election fraud comes days after Jim Moran dispatched a letter to the DOJ urging an investigation into a GOP firm, Strategic Allied Consulting, which had been linked to allegations of voter fraud in Virginia and Florida. That letter read in part, “The number of allegations in a multitude of locations would seem to suggest something more than the isolated acts of ‘a few bad apples.’”

Given the recent actions of his son, Jim Moran knows something about bad apples: they don’t fall far from the tree.