The Taliban’s Barbaric Shooting of a Child Activist 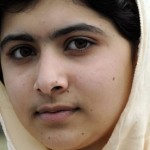 Malala Yousufzai, a 14-year-old girl who garnered international acclaim for having the courage to publicly speak out against the Pakistani Taliban, was shot in the head and critically wounded by the barbaric Islamist terror group.

According to Pakistani police, Malala was riding home from school in the Pakistani city of Mingora when a man stopped the school bus and asked the students to point her out. Once identified, the assassin shot Malala as well as her friend who was seated next to her.

Despite her young age, a Taliban spokesman said it had no choice but to eliminate Malala as she “was pro-West, she was speaking against Taliban and… she was promoting Western culture in Pashtun areas.”

Both girls were fortunate to survive the cowardly murder attempt, in particular Malala, given that the bullet that entered her head had passed through her skull without causing any damage to her brain.

However, Malala’s reprieve from death may be short lived as the Taliban has stated that it still intends to kill this “secular-minded lady” and thus finish “this chapter,” a murder that it hopes will prevent other young Pakistani people from speaking ill of the Islamist terror group.

Unfortunately, Malala has been a target of assassination since she was just 11-years-old and the Tehreek-i-Taliban (TTP) was ruling her home region, Pakistan’s Swat Valley, in a Sharia-based reign of terror.

The Taliban reign, which began in earnest in 2007, included such niceties as public segregation of the sexes; bans on music, movies, and television; a ban on girls’ education; and public whippings, beatings and stoning meted out to violators of the new rules.

During this time Malala, using a pseudonym, documented the abuses being perpetrated under the Taliban occupation by writing a blog under a Pakistani-language BBC website called the “Diary of a Pakistani Schoolgirl.”

Malala’s blog, among other things, highlighted the Taliban’s disdain for “un-Islamic education” in general and hatred of girls’ education in particular, scorn which found its expression in the group’s rampant destruction of over 400 of Swat’s nearly 1,600 schools, 70 percent of which were girls schools.

It should be noted that the TTP’s enlightened views on education are equally shared by its brethren in Afghanistan. The Afghan Taliban have attacked and destroyed over 240 girls schools throughout the country, assaults which include 17 poison-gas attacks on schools as well as numerous acid attacks on girls attempting to attend school.

So, when the Pakistani military ousted the Taliban from control of Swat in 2009, Malala used the national attention her blog had generated to drop her pseudonym and openly campaign on the need for educating girls.

For her efforts, Malala was awarded in 2011 Pakistan’s National Peace Award and also nominated for the International Children’s Peace Prize, notoriety that only served to enlarge the Taliban target on her back.

In fact, despite Taliban death threats, Malala had courageously broadened her campaign to include other human rights issues anathema to the Taliban, including a focus on the rights of Pakistani children, an area decidedly lacking in Taliban concern.

Of course, to be fair, life for children in Pakistan is far from good even when removed from underneath the Taliban yoke, a fact highlighted in a recent report from a leading Pakistani child advocacy group, the Society for the Protection of the Rights of the Child (SPARC).

SPARC’s Dickensian statistics on Pakistan include 25 million children not enrolled in school, the second highest number worldwide; Pakistan’s ranking among the five most dangerous countries in the world for kidnapping, with about 7,000 child abductions reported in 2011; and most of the children working as domestic workers in Pakistan being between 10-15 years of age.

Nevertheless, the Taliban has taken its disregard for children to a completely new and ruthless level.

After all, this is the same barbaric group that along with its Islamist allies in the region have constructed and operated a slew of suicide training facilities, death factories that have trained over 5,000 Pakistani children, many as young as eight, as suicide bombers.

In fact, the Pakistani jihadists’ enthusiasm for sacrificing children can be witnessed by the fact that of the 2,488 incidents of terrorism in Pakistan since 2009 — which have claimed the lives of 3,169 people — most were the result of suicide bombings conducted by underage terrorists.

That casual disregard for child welfare was recently on display in comments made by a Taliban spokesman in the days preceding Malala’s shooting, when he said the Taliban would continue to target Pakistan’s educational system, one which he said spreads “un-Islamic culture and vulgarity.”

Specifically, if that targeting included killing innocent girls and boys in the process, the Taliban spokesman said the group was, nonetheless, still providing a valuable public service as “We consider our activities beneficial because they are good for them in the afterlife.”

So given that, it’s certainly not surprising then to find that the Taliban would casually shoot a bullet into the head of a young girl simply for putting them in a bad public spotlight.

It’s certainly not surprising to Kamila Hayat, a senior official of the Human Rights Commission of Pakistan, who said of the attack on Malala, “This is an attack to silence courage through a bullet. These are the forces who want to take us to the dark ages.”

Tragically, for Malala Yousufzai and millions of Pakistani girls like her, those dark ages have already arrived.