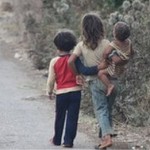 One of the more loathsome horrors of Syria’s civil war has been the deliberate targeting of Syrian children by both pro-government and rebel forces, barbarity which includes imprisonment, rape, torture, sexual abuse, murder, and use as human shields.

That gruesome reality has been chillingly documented in recently released reports by the United Nations and two British-based humanitarian groups working with Syrian refugees, War Child and Save the Children.

While children in war zones are normally caught in the crossfire between opposing forces, the purposeful targeting of young children, according to the July 2012 War Child report, make the Syrian conflict “disturbingly unique.”

A glimpse into that disturbing uniqueness can be seen in the acts of Syrian security forces and pro-regime militias abducting children and imprisoning them in former schools which have been converted into specially designed torture centers.

There, according to a June UN report on children and armed conflict, the children are then “beaten, blindfolded, and subjected to stress positions, whipped with heavy electrical cables, and scarred by cigarette burns.”

One of these victims was a 15-year-old boy named Khalid, tortured in his old school where his father had once been the principal, who said, “They hung me up from the ceiling by my wrists, with my feet off the ground. Then I was beaten. I was terrified.”

In some instances, captors would bind the children’s hands together so tightly that, according to one victim, “the veins in their wrists would start to bleed. I witnessed so many children dying from this torture.”

For some, the maltreatment inflicted was a form of “sexual torture,” sexual violence levied on both boys and girls, some as young as 12, which included “rape, penetration with objects, sexual groping, prolonged forced nudity, and electroshock and beatings to genitalia.”

However, the type of sadistic punishment meted out to the children followed no formal protocol, but rather, according to a child sufferer who was subjected to electric shocks, “depended on what mood these men were in,” adding, “They showed no sympathy, no mercy.”

This abject cruelty was pointedly expressed in the torture and death of a 6-year-old boy named Alaa, who was slated for torture because his father was an anti-government activist wanted by the Syrian regime.

To that end, over the course of three days, the little boy was tortured, beaten and starved by his captors, with one 16-year-old witness to Alaa’s suffering saying, “I watched him die…He was terrified all the time. They treated his body as though he was a dog.”

Unfortunately, these children are housed like animals as well, inhumanely incarcerated in small, overcrowded rooms, often shared with decomposing bodies. Then, as they await their assigned date with their torturer, they are starved for days on end, with their only drinkable water available from the cell’s toilet.

Yet, as horrific as life is in these torture depots, children outside its deadly confines face equally lethal dangers, such as being unsuspectingly used for target practice.

That barbaric practice was distressingly recalled by one Syrian woman who witnessed two armed militia men betting on which of them could shoot an 8-year-old boy playing alone in a street.

According to the woman, the men shot the boy, but their shots didn’t kill him right away. As he lay bleeding, the boy’s mother tried to reach him but was kept back by the men, leaving the boy to die hours later alone in the street outside his home.

It should be noted that while the Syrian government may treat a child’s life as worthless, it has discovered they possess some practical value, such as serving as human shields, often placing them on the front of government tanks and armored personnel carriers as they advance into an opposition held area.

One Syrian man named Nabil witnessed such a barbarous and cowardly act when he recounted the sight of two tanks entering his village with “children attached to them, tied up by their hands and feet, and by their torsos,” a sight which made Nabil feel so helpless that all he could do was cry.

Of course, none of this child-driven barbarity comes as a complete shock given that pro-government forces had signaled their contempt for children early on in the Syrian uprising, disregard expressed in the form of regime snipers deliberately shooting children who were part of street protests.

In fact, so distasteful was the sight of child protesters to the Syrian regime that it would take its vengeance by attacking schools. In one village, pro-regime militia went to a grade school, picked 50 children at random, many of whom were as young as 6-years-old, and then proceeded to tear out their fingernails.

Still, while most of the acts of violent child assault and murder have been committed by Syrian security forces and pro-regime militias, such as the dreaded Shabiha militias, the hands of opposition forces are far from clean.

That assessment was delivered in an August report by the UN Independent International Commission of Inquiry (UNCoI) on Syria, in which it found the Free Syrian Army (FSA) forcibly recruiting children, some as young as 8-years-old, into their ranks.

Moreover, Syrian Christian children have been targeted, along with their families, by elements of the FSA and an assortment of armed Islamist and al-Qaeda-linked terror groups as part of a systematic cleansing of Syrian Christians.

That cleansing includes the killing of whole families, the sacking of churches, and the forcible evacuation of Christians from entire towns and cities, such as the forced Christian exodus of nearly 50,000 people from Homs in which armed Islamists murdered more than 200 Christians, including entire families with young children.

Not surprisingly, all these heinous actions led the UNCoI to find Syria’s opposition forces, along with the Syrian government, as having committed war crimes and crimes against humanity, transgressions which include an ever escalating assault on Syrian children.

As Rob Williams, CEO of War Child, has said, “The Syrian conflict must now rank as one of the worst for the depth and scale of abuses against children,” adding that it “will scar Syria for generations.”

Of course, given the increasing degree of Syria’s child-directed violence, that assumes there are any Syrian children left alive to heal.