To Jail a Down’s Syndrome Girl 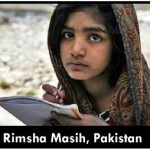 An 11-year-old mentally disabled Christian girl has been sent to a Pakistani prison over allegations she committed blasphemy, just the latest act of bruising intolerance being perpetrated by Muslims against Pakistan’s besieged Christian minority group.

Rimsha Masih, who is afflicted with Down’s Syndrome, was arrested in early August at her home in the capital of Islamabad after she had been accused by her Muslim neighbors of burning 10 pages of the Koran.

Rimsha’s alleged heretical act offended local Muslim sensibilities enough to spark an angry mob of over 600 to gather outside her home, threatening to burn down Christian homes in the neighborhood if the police did not immediately arrest the young girl.

However, according to Farrukh Saif, head of the Pakistan-based human rights group, World Vision in Progress (WVIP), Rimsha, who works as a maid, denied any blasphemous wrongdoing, claiming she was simply burning garbage and “did not know a Koranic book was among the papers because she cannot read.”

Nevertheless, Pakistani police quickly brought Rimsha into custody, persuaded less by her illiteracy and mental impairment and more by a swelling Muslim mob bent on torching an entire Christian community, a rabble of thousands reportedly “already burning tires and ready to attack the Christians.”

To that end, over a thousand Christians in the area, including Rimsha’s parents and relatives, were forced to flee their homes, seeking shelter in church compounds or sleeping outdoors, a move Farrukh Saif said was “the largest reallocation of Christians from any area of Pakistan.”

While Muslims thirsted for Islamic retribution, others urged restraint, such as Pakistan’s Minister for National Harmony, Paul Bhatti, who said it was unlikely Rimsha “purposefully desecrated the Koran” given her mental disorder.

Of course, when it comes to issues of blasphemy, a number of Muslims are unwilling to let a blasphemer’s mental competence serve as a mitigating factor to ease their fury.

That moral stance was on display in July in the case of Ghulam Abbas, a 40-year-old mentally impaired Muslim man, accused of burning a copy of the Koran in public. Yet while in custody in the central Pakistani city of Bahawalpur, police said Abbas “had no idea what was going on…he kept laughing and chanting.”

Nevertheless, local Muslim religious leaders incited a mob numbering in the thousands to storm the police station where Abbas was being held. There, the horde dragged Abbas to the spot where he purportedly desecrated the Koran, poured gasoline over him, and then burned him to death as he screamed for help.

However, for Pakistan’s “tolerated minorities,” such as Christians and Hindus, that type of barbaric treatment is all-too commonplace for those unfortunate enough to run afoul of Pakistan’s notorious blasphemy laws.

Those statutes, which earn sentences of death or life in prison if found guilty of insulting Islam’s Prophet Muhammad or desecrating its holy book, the Koran, are exceedingly popular among most of Pakistan’s 180 million Muslim populace.

In fact, recent efforts by Pakistani political leaders to repeal the blasphemy laws have produced some deadly results: in January 2011 Punjab Governor Salman Taseer, the only Christian minister in Pakistan’s Cabinet, was shot and killed by one of his own guards; two months later Shahbaz Bhatti, the Minister for Minority Affairs, was gunned down by Islamists.

Perhaps part of Pakistan’s enchantment with its blasphemy laws stems from the fact that many Pakistani Muslims believe killing a blasphemous person earns a heavenly reward, a holy perk that may help explain why at least 30 Christians accused of blasphemy since 2009 have been killed by mobs of Islamist vigilantes.

Yet, while some blasphemous Christians are killed as blood sport for enraged Muslim mobs, others are targeted for assassination by a select few.

For example, in July 2010 several gunmen in Punjab Province shot to death two Christian brothers accused of blasphemy, Rashid Emmanuel and Sajid Masih Emmanuel, as they left court handcuffed together on their way back to prison after their court appearance.

Both brothers had been arrested a month earlier after leaflets allegedly bearing their names and featuring derogatory remarks against the Prophet Muhammad were found around town. Ironically, local police were going to clear them because an analysis of the hand-written leaflets showed that they were not the authors of the offending script.

In fact, Pakistani authorities claimed the accusations against the Christian brothers were fabricated by people who had a grudge against them, an unsurprising assertion given that Pakistan’s blasphemy laws contain no provisions to punish a false accuser or false witness. As a result, the laws have often been used to settle personal scores rather than to defend against perceived sleights to Islamic piety.

One such notable victim of score settling is Asia Bibi, a Christian mother of five children, who has been awaiting a death sentence in prison since 2009 after a verbal disagreement with some women in her village led to her being accused of having blasphemed against Mohammad.

Sadly, this relentless Muslim persecution of Christians has a trickling down effect. As an example, Christian children required to take Islamic studies in school are in danger, according to one young Pakistani mother, simply “if they write anything or misspell anything to do with the Prophet Mohammad.”

To that end, some parents take the added precaution of not telling their children about Jesus because they are terrified they will fall prey to accusations under the blasphemy statutes. As such, an entire Christian generation of young children is growing up not knowing their faith for fear that it will lead to potentially disastrous consequences.

One such Christian child, Rimsha Masih, now faces her own set of disastrous consequences as she remains incarcerated in a Pakistani jail, her fate far from settled. As Ansar Burney Trust, a human rights advocacy group, says children as young as seven can spend years behind bars before the courts have even decided if they are innocent or guilty, estimating there are “as many as 4,500 juveniles in Pakistani prisons.”

Of course, not everyone shares concerns about Rimsha’s fate, most notably Muslim residents in her neighborhood, who assign Rimsha’s predicament to her deep misunderstanding and disrespect to Islamic traditions and culture.

That viewpoint was perhaps best expressed by a local shopkeeper, Mohammed Ilyas, who simply said, “Even a 3-year-old, 4-year-old child knows: ‘This is Muslim. This is Christian. This is our religion.’”

That religion, apparently, requires that not only a toddler be expected to know what constitutes an heretical act against Islam but also an 11-year-old-girl with Downs’s syndrome, and if they can’t, be prepared to suffer the consequences.