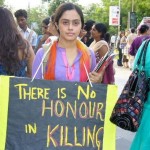 A growing collection of Palestinian leaders are acknowledging that the recent rise in “honor killings” and other horrific acts of violence being perpetrated against Palestinian women can only be stemmed by changing the Arab cultural and Islamic propensity of violence toward women.

The latest victim of a Palestinian honor killing was Nancy Zaboun, a 27-year-old mother of three, who, moments after she left a divorce hearing in Bethlehem, was brutally murdered by her husband.

Nancy had been in the process of seeking an early exit from her marriage after having suffered repeated beatings over the course of her ten-year marriage, beatings that often required hospitalization but which never resulted in criminal charges being brought against her husband.

Unfortunately, Nancy Zaboun’s attempt to flee her abusive marriage caused such a stain on her husband’s familial honor that he stabbed her multiple times, a death sentence which tragically has been shared by a long and ever-expanding list of Palestinian women and girls.

In the years between 2007 and 2010, the Palestinian Independent Commission for Human Rights has reported 29 women were killed by family members in the West Bank and Gaza Strip. However, in the past two years, 25 women have been subjected to honor killings, with 13 women murdered in 2011 and 12 women slain in 2012.

Those victims include: 17-year-old Rofayda Qaoud, whose mother placed a plastic bag over her head and slashed her wrists after she had been raped and impregnated by her two brothers; 27-year-old Fadia Najjar, a divorced mother of five, bludgeoned to death by her father because she owned a cell phone that he thought she was using to call a man outside of the family; and 20-year-old Aya Baradiya, tied up and thrown down a well to die by her uncle because he disapproved of her engagement.

Yet, while honor killings have long been a staple byproduct of Palestinian society, the sharp upsurge in familial murder over the past several years has generated widespread condemnation by a growing coalition of Palestinian officials and human rights activists, denunciations which have included calls for new criminal legislation and longer prison terms.

To that end, Palestinian Authority (PA) President Mahmoud Abbas in May 2011 issued a decree that amended decades-old laws which had guaranteed “leniency” for honor killers such that prison terms might not exceed three years.

The result of the presidential decree, according to PA Justice Minister Ali Mohanna, is that honor killings are now treated as any other murder, and, as such, claims of assailants that they were simply protecting “family honor” are no longer taken into account.

However, that judicial opinion is not equally shared by all, as critics argue the Palestinian legal system does not punish the crime of honor killing severely enough and thus still allows for violence against women to continue to go unpunished.

Specifically, they point to the fact that tenets of the amended laws in President Abbas’ legal order left in place can still be used to justify honor killings, such as mitigating circumstances that let perpetrators avoid severe punishment if they can prove that they acted in a “state of rage.”

As such, Attorney Salwa Banura said the new law encourages murders, since mitigating circumstances “are accepted by the courts, and a man who murders his daughter, wife or sister stays in prison only three months, and is then released.”

Yet, unfortunately, honor killings remain just one small aspect of the horrific torment faced by Palestinian women and girls at the hands of Palestinian men.

Not surprisingly, for some, this pervasive violence has been laid at the feet of the usual suspects, namely the Israelis. This scapegoating was summarily expressed in a 2011 report by the United Nations Economic and Social Council which blamed harsh economic and social conditions created by the Israeli “siege,” an occupation which has led to high levels of poverty, unemployment and, thus, “violence, within families.”

That belief was echoed by Rahiba Diab, the PA’s Minister of Women’s Affairs, who recently said that while the Palestinian Authority was committed to eliminating all forms of violence against Palestinian women, one should not “forget about the violence that comes from the critical political situation that we’re living under as Palestinians.”

However, an increasing number of leaders and human rights activist are refusing to buy into Israeli complicity as an excuse for Palestinian man-on-woman violence, but rather instead laying the blame on a much deeper problem, namely, “Arab-Muslim culture.”

For starters, while they applaud legislative efforts to at least address the issue of violence against women as a crucial first step, they maintain no amount of legislation will stop the violence and killings until cultural attitudes change within Palestinian society.

Those cultural attitudes, according to Mona Shawa, head of the women’s unit at the Palestinian Center for Human Rights in Gaza City, are based on female inequality and discrimination that “encourages violence against women.”

For her part, Maysoun Ramadan, Director of the Mehwar Center, the West Bank’s only women’s shelter, has simply noted, “We have a lot of previous constructions about women which need to be changed.”

Those “previous constructions” were bluntly articulated by Israeli-Arab lecturer Yusuf Jabareen in a June 2012 interview on Palestinian TV in which he placed the blame squarely on an Arab culture which has served to produce a deep vein of misogynistic cruelty in Arab men, callousness that encompasses their own immediate and extended families as well as women in general.

As Jabareen further explained, “Part of our [Palestinian] identity is to attack women… to beat women… — we must acknowledge it…Palestinian identity has its charms, but there are things that we have adopted from Arab culture for centuries that harm the individual and the woman…That’s part of our identity.”

Giving voice to that belief, the official Palestinian Authority daily Al-Hayat Al-Jadida weighed in with two editorials that said it is an Arab “tribal mentality” that justifies the murder of women, rationalization based in part because many Palestinians “still think of them [women] as the bent rib of Adam, void of intelligence or religion.”

So, in an effort to rectify that thinking, Al-Hayat Al-Jadida has called for a “cultural revolution”

“Our [Arab and Muslim] societies consider the crime of violence against women, honor killings, and avenging the killing [of relatives], as legitimate, understandable and [part of] a unique heritage. There are some who even praise and glorify this [honor killing] as a manly, heroic act, turning it into an aspect of [our] culture that molds the character of Arab and Islamic societies. If we wish to free our society from this crime’s octopus grasp, we must first admit that without a cultural revolution that will cleanse our perceptions, our books, and our heritage from sanctifying murder performed in the name of Allah and honor, we will not be able to take a single step towards lessening this crime[.]”

Unfortunately, while Palestinian misogyny may indeed have an Arabic taste to it, deeply marinated Islam gives it its full flavor, seasoning found in Muslim countries throughout the Mideast, South Asia and Africa, where men more often than not treat women little better than livestock.

Changing that dismal equation will take more than just a cultural revolution.