The Unending War on Afghan Women 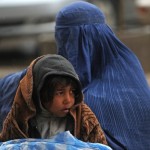 The “honor beheading” of an Afghan woman and her two children is but the latest act of barbarism in the escalating and seemingly never-ending violence being levied upon Afghanistan’s women and girls.

The latest victims of the Afghan war on women were a 30-year-old woman named Serata and her eight-year-old son and nine-year-old daughter, all of whom had their heads cleaved from their bodies by Serata’s divorced husband, Mohammad Arif.

While Serata appeared to be the sole target of Arif’s revenge, according to Afghan police, after her children saw their father burst into their home in Ghazni province and “take their mother’s head off, he killed them too.”

Serata and her children’s horrific deaths were prompted because she had apparently “dishonored” Arif’s familial reputation by divorcing him last year after suffering through a decade of abuse, a stain so great that it necessitated Arif’s act of bloody vengeance.

Sadly, this horrific crime appears to be only the latest in a rapidly growing wave of “honor killings” plaguing Afghan women and girls, a swell that saw 17 such killings reported across Afghanistan in March and April alone.

Like Serata, seeking a divorce can lead a woman to her death at the hands of an aggrieved husband or relative. Yet women slated for honor killings can also include those who have married a man of their own choosing; had any contact with an unrelated male; dated a Christian; openly flirted; or adopted Western ways of dress and behavior.

However, acts over which a woman has no control, such as being the victim of rape, can also provoke an honor killing.

In February, Estorai, a 22-year-old mother of two, was strangled to death by her husband for her failure to produce a male offspring. Unhappy that their firstborn was a girl, Estorai’s husband had warned that he would kill her if she gave him another daughter, a deadly promise he kept within weeks after Estorai gave birth to their second daughter.

In June, Gulsika, a 20-year-old woman in Kandahar province, was shot by her husband for her failure to conceive, even though doctors who had examined her said it was her husband — and not Gulsika — who was the one unable to have children.

Yet, while the rise in Afghan honor killings has been on a meteoric rise of late, overall violent attacks on women and girls throughout Afghanistan have also dramatically increased.

To some, the resurgence in violence has been attributed to the Taliban extending its reach across Afghanistan and bringing with them the brutal yoke it had placed on Afghan women during its five-year rule of the country from 1996 -2001.

That Taliban reign subjected Afghan women to a Hobbesian nightmare of public floggings and executions if they, among other things, failed to wear a head-to-toe burqa; worked outside their homes or even left their homes unaccompanied by a close male relative; laughed loudly; or were photographed or filmed.

This Taliban-brand of female stewardship was on display in a gruesome video recently taken in a village in Parwan province in which a Taliban member is seen shooting a kneeling woman accused of adultery five times in the head with an automatic rifle.

Before the shots struck the women’s head, a male voice in the background intoned, “Allah warns us not to get close to adultery because it’s the wrong way. It is the order of Allah that she be executed.” To that refrain, a cheering throng of over 150 male villagers chanted, “Long live the Afghan mujahideen!”

It should be noted that while the woman had been charged with the “crime” of adultery, she was in fact the discarded pawn of two Taliban commanders, both of whom had been sexually involved with her before deciding to torture her and then kill her to settle a dispute between the two of them.

Yet, while the Taliban may indeed be largely responsible for the latest rise in violence, the actions of the brutal Islamists are being abetted by the many Muslim men in Afghanistan who have long been treating women and girls little better than human chattel.

The UN reports that nearly 90 percent of Afghan women suffer from some form of domestic violence. That abuse includes being given away to pay family debts or settle disputes as well as forced child marriage, the latter practice which has led to over half of the marriages in Afghanistan involving girls under the age of 16.

Not surprisingly, according to the head of an Afghan women’s rights group, these early marriages “cause dangerous levels of stress for women too young to cope” with the “wifely roles expected of them,” roles that more often than not include a torrent of physical and emotional abuse issued from the bride’s husband and family.

Tragically, the trauma engendered from forced child marriage has also produced an epidemic of suicides from desperate girls unable to flee their matrimonial hell. In Afghanistan’s Daikundi province alone, an investigative report by the Institute of War and Peace Reporting found that at least 200 women annually commit suicide in an effort to flee forced marriage.

While most of these young women take rat poison or insecticides or hang themselves in order to exit their turmoil, a fairly new and equally disturbing trend of suicide is taking place: self-immolation. In western Afghanistan alone 94 cases of self-immolation by young teenage brides who have been married off by their families have occurred over the past year.

Yet, as sad as it may sound, it’s not terribly surprising that these young girls feel forced to take such extreme measures to extricate themselves from family violence given the religious and cultural penalties they will suffer for even raising complaints about their plight.

In Afghanistan’s highly patriarchal society women who seek help from Afghan courts and police are often pressured by authorities to withdraw their complaints, or failing that, find themselves arrested and jailed for committing “moral crimes.”

One such case involved a 15-year-old bride named Sadat who set herself on fire after months of being beaten repeatedly by her husband and father-in-law, an act which resulted in burns over 80 percent of her body.

Prior to her self-immolation, Sadat had petitioned Afghan courts to end the violence in her home. However, the prosecutor accused Sadat of lying, demanding that she withdraw her complaints or face “dire consequences” if she refused. According to Sadat, “Such behavior left me with no choice but self-immolation because it was the only way to get rid of the violence and insults.”

Of course, it should be noted that Afghan women will find little legal relief if forced to utilize their other judicial option, their local “jirga.” These tribal assemblies of village elders, common throughout Afghanistan and Pakistan, bring a brand of Sharia justice that can be especially harsh.

An example of that justice occurred in 2011 in neighboring Pakistan when a Pakistani jirga declared that a 13-year-old girl who had been kidnapped and viciously gang raped for three days by four Muslim men to be a “black female” and thus subject to an honor killing from her family.

As AIHRC Commissioner Suraya Subhrang said, these “men make a quick decision in their own courts to kill a girl and hold a prayer for her the next day.”

Given the rising cloud of murderous deaths enveloping the women and girls of Afghanistan, the prayer rooms in Afghanistan’s mosques must be overflowing.