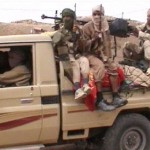 Jihadists from as far away as Afghanistan and Pakistan are flocking to northern Mali to train al-Qaeda-linked terrorist groups and Islamist insurgents, turning the region — an area the size of Texas — into the next epicenter of international terror.

Terrorism in the African Sahel — the sub-Saharan stretch of desert that includes the West African nations of Mali, Niger, Burkino Faso and Mauritania — has been gathering in intensity since the collapse of Muammar Gadhafi’s Libyan regime in October 2011.

At that point an influx of mercenaries and looted weaponry, including missile launchers, armored vehicles and anti-aircraft missiles, have flooded into the Sahel and into the hands of a rogue’s gallery of al-Qaeda, Islamists, and criminals long engaged in rampant terrorist attacks, arms dealing, drug trafficking, and ransom kidnapping.

This collection of Islamist killers and gangsters has been able to move relatively unchallenged throughout the Sahel, and the recent seizure of northern Mali by both Islamist and separatist forces has opened the window for northern Mali to become a permanent training base and safe haven for terrorists operating throughout the region.

To that end, Al Qaeda in the Islamic Maghreb (AQIM) has reportedly extended an invitation to jihadists from around the globe to come to northern Mali to help train its fighters, as well as those from two other al-Qaeda-linked groups: the Movement for Unity and Jihad in West Africa (MUJWA) and Nigeria’s Boko Haram.

Those jihadist calls have been enough to make Mali, according to one American official, “a cool place for jihadists from the region,” while French Defense Minister Jean-Yves Le Drian said their presence risks turning northern Mali into “a West African Afghanistan.”

That nightmare scenario is being facilitated by the ongoing battle over control of northern Mali between the Ansar Dine (Defenders of Faith), an al-Qaeda-linked and AQIM-backed Islamist group, and the separatist Tuareg MNLA (National Movement for the Liberation of the Azawad).

The battle between the two groups began in April, shortly after Ansar Dine and MNLA forces — aided by a March military coup which ousted then-Mali President Amadou Toumani — seized control of nearly two-thirds of the country and declared the conquered territory the independent state of Azawad.

Specifically, Ansar Dine and MNLA broke ranks over questions of whether and how to implement Sharia law in Azawad, a development not terribly shocking given the disparate stated agendas of the two groups.

While the MNLA, which has vehemently denied any Islamist or al-Qaeda links, has maintained its only goal was the creation of an independent secular state in the north, Ansar Dine’s stated objective has been to turn all of Mali into an Islamic dictatorship under Sharia law.

Thus, when a statement at the end of May from the MNLA surprisingly announced its official merger with Ansar Dine and declared that the two groups had agreed to turn Azawad into an Islamist state, it came as little surprise when that joint declaration was almost immediately rejected by top MNLA officials.

Instead, the MNLA leadership insisted that once they had Azawad under control, they would turn their attention to dealing with the Ansar Dine, a promise evidenced by subsequent armed clashes between MNLA and Ansar Dine forces in the past several weeks.

Yet, despite having an estimated 3,000 fighters to Ansar Dine’s 300, the prospect of the MNLA effectively winning control over Azawad is looking rather murky, evidenced by the fact that Ansar Dine forces continue to control the major regional cities of Gao, Kidal and Timbuktu, while MNLA forces are relegated to the surrounding countryside.

The failure of the MNLA to exercise control over Ansar Dine has been due in part to the military and financial resources provided to Ansar Dine by its al-Qaeda allies, as well as to the MNLA’s inflated military skills garnered as mercenaries for former Libyan dictator Muammar Gadhafi.

As one Western analyst said, when the Tuareg were in Libya “most of the guys hadn’t been fighting. They were just sitting around in barracks… When it comes to the people actually fighting, the cold-blooded killers, the ones trained to kill, they are from Ansar Dine.”

Those lethal Ansar Dine attributes have now been on full display as the Islamists consolidate their presence in the northern Mali areas under their control, often with the help of their al-Qaeda allies and the recently arrived foreign jihadists.

In Timbuktu and Gao, the Ansar Dine Islamists have vigorously imposed Sharia law, separating boys and girls in school, flogging those who drink alcohol or smoke cigarettes, outlawing soccer and television, forcing women to wear full, face-covering veils, and banning music from the radio.

Not surprisingly, Christians have fared little better in their encounters with the Ansar Dine, with reports that churches in the towns of Gao and Timbuktu have been destroyed and Christians subjected to “massacres and rape of women.”

While Ansar Dine is focusing its efforts in remaking Azawad into an Islamist state, its al-Qaeda allies are using the time to recruit a new generation of jihadists to their ranks, a recruitment campaign which includes distributing money and goods to poor Mali citizens.

Those goodwill efforts have been finding fertile ground among a Mali populace greatly impoverished by a long lasting drought that has caused a severe food crisis in the country, a disaster which has led to the exodus of 172,000 Malians to neighboring countries.

Yet, the Malian central government is in no position to restore order to the north, as troops loyal to Mali’s former government and those who seized power in the March 22 coup have continued to fight in the streets of the Mali capital of Bamako.

The Mali government’s impotence in reasserting its control over northern Mali hasn’t escaped the attention of neighboring countries, as both the Economic Community of West African States (ECOWAS) and the African Union have called on the UN Security Council to support regional powers in a possible military intervention in Mali.

For its part, the UN Security Council has delayed acting on that request, inaction which has caused officials and diplomats in the region to warn that time may be running out, warnings best expressed by Maman Sidikou, Niger ambassador to Washington, who recently said, “Each day, radical Islam is consolidating its power and control in the area,” adding, “The time to kill the snake is before it has babies.”

Unfortunately, the growing influx of foreign jihadists into northern Mali indicates the Islamist snake has already given birth to a slew of terrorist hatchlings.