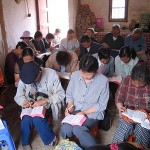 Bags of urine hurled by a mob of 600 Muslims at Christians attempting to attend church service is the latest in a series of disgusting acts of degradation and violence perpetrated by Indonesia’s growing Islamist movement.

The Muslim mob was led by members of Indonesia’s Islamic Defenders Front (FPI), a militant Islamist group that has been directly involved in 34 of the 54 documented acts of violence and destruction against Christians and Church property since 2012.

In an increasingly violent campaign launched against Indonesia’s religious minorities, the 30,000-strong FPI spearheads a growing cadre of militant Islamist groups whose ranks include the Islamic Defenders Legion (LPI), an FPI affiliate; the Indonesian Mujahideen Council (MMI); and Kokam, the youth wing of Muhammadiyah.

The victims of the latest Islamist assault — which also included a barrage of rotten eggs, ditchwater and stones — were over 100 congregants of the Filadelfia Batak Christian Protestant Church (HKBP) in the city of Bekasi, located outside the capital of Jakarta.

It should be noted that the “church” at which the HKBP congregants were headed to pray when attacked is in actuality an empty parking lot, a venue of worship necessitated by the local Bekasi government’s refusal since 2009 to allow HKBP members to build and occupy an actual church.

Yet, despite a ruling in July 2011 by Indonesia’s Supreme Court to overturn the Bekasi government’s action, local authorities have refused to carry out the court’s rulings, instead relying on Islamist-led mobs to enforce its dictates.

Building houses of worship in Indonesia, unfortunately, has become increasingly problematic given the enactment of a 2006 Indonesian ministerial decree that tightened criteria for building churches. While ostensibly intended for “maintaining religious harmony,” in practice the decree is only enforced on religious minorities.

So, given all that, it wasn’t too surprising that Bekasi police reportedly looked the other way when the urine-toting Islamist mob, which included the chairman of the Bekasi chapter of the FPI, launched its recent assault on the HKBP worshippers.

Unfortunately, Islamist violence is being abetted with a wink-and-nod by the Indonesian government, led by President Susilo Bambang Yudhoyono, who despite his public appeals for tolerance has been reluctant to expend political capital to rein in the Islamists.

For example, like the HKBP, the Gereja Kristen Indonesia Church (GKI-Yasmin Church) in nearby Bogor, has also been denied permission to meet for worship on its property, despite a similarly favorable Supreme Court ruling upholding its legality. Yet, in both cases, Yudhoyono has claimed he has no authority to intervene.

Yudhoyono’s reluctance to uphold Indonesian law may stem in part because his Democratic Party rules a coalition government that includes a number of hard line Islamist political parties, such as the Islamic-based United Development Party (PPP) and the Nation Awakening Party (PKB).

As one Indonesian Human Rights official said, “Senior government officials have shown quite openly that they protect groups like the Islamic Defenders Front. They’re very powerful, they’re very influential, and people don’t really want to be seen as working against them.”

Not surprisingly, then, the government’s failure to sufficiently clamp down on Islamist fervor has only served to embolden the Islamists to launch more frequent acts of violence and intimidation. According to the Setara Institute, which monitors religious freedom, attacks on religious minorities have increased from 135 in 2007; 216 in 2010; and 244 in 2011.

Those deeds were most recently on display when the FPI and its chairman, Habib Rizieq, strong-armed Indonesian authorities into denying a permit for a scheduled concert in Jakarta by pop star Lady Gaga by issuing warnings they would break up the concert if police failed to do so.

Those threats proved forceful enough for Lady Gaga to cancel the concert, a decision that prompted FPI spokesman Salim Alatas to claim, “This is a victory for Indonesian Muslims. Thanks to God for protecting us from this devil.”

That FPI victory had been preceded a week earlier by violent protests launched by the Indonesian Mujahedeen Council (MMI) to shut down several promotional book events in Yogyakarta Java held by lesbian Canadian Muslim writer Irshad Manji, author of Allah, Liberty and Love and The Trouble with Islam Today.

Those protests, in which one of her staff members was struck by an iron bar wielded by an MMI member, led Manji to note, “Four years ago I held a book launch here that attracted both ultraconservative Muslims and Muslim transsexuals, and each of them had their say… four years later, the center of Islamic pluralism has become just another cesspool of intimidation.”

Unfortunately, that expanding sewer of Islamic intolerance extends well beyond Indonesia’s 36 million Christians, finding its way to smaller spiritual movements, such as the Baha’is, as well as to minority Muslim sects, such as Sufis, Shiites and Ahmadiya.

Those latter Muslim sects are considered by Sunnis, who constitute ninety percent of Indonesia’s 186 million Muslims, as nearly heretical, with the Ahmadiyya, in particular, having borne the largest brunt of religious persecution.

Their ill-treatment was codified in a 2008 government decree that requires the Ahmadiyah sect to “stop spreading interpretations and activities that deviate from the principal teachings of Islam,” which has been used to forcibly shut down more than 30 Ahmadiyah mosques.

In fact, the onslaught against the Ahmadiyah has taken on an increasingly violent face, most glaringly displayed in February 2011, when a mob of 1,500 Muslims armed with machetes and stones attacked an Ahmadiyah community in western Java, killing three 21 Ahmadis. Adding further insult to that tragic event was that the Muslim attackers who were prosecuted served no more than six months in prison.

Even those with no religious affiliations can be swept up in the Muslim torrent, as was the case with Alex Aan, a 30-year-old civil servant, who faces up to six years in prison as the first atheist in Indonesia charged with “blasphemy, disseminating hatred and spreading atheism” through his Facebook page.

Yet, despite it all, there are many who dismiss the rise of persecution against religious minorities as being the work of a relatively small number of Islamist zealots and not a true indicator of the feelings of the majority of Muslims in Indonesia.

In fact, some Muslims argue that religious minorities may actually be bringing this assault upon themselves. That view was best expressed after the attack in Bekasi when one Muslim resident of the city explained, “The Christians should have asked us, ‘Can we worship and build a church here?’…But if in fact the people are not willing and reject the request, then why must they insist?”

Unfortunately as events continue to dictate, insistence on following one’s religious beliefs isn’t a right reserved for Christians or, for that matter, any of Indonesia’s other religious minorities.