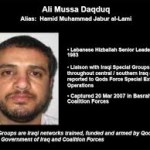 An Iraqi court recently ruled that Ali Musa Daqduq, a Lebanese Hezbollah terrorist accused of helping to coordinate the 2007 abduction and murder of five American soldiers in Karbala, Iraq, should be released due to “lack of evidence.”

The decision comes only months after the Office of Military Commissions started filing charges of murder, terrorism and espionage against Daqduq, marking the Hezbollah terrorist as the first potential defendant without connections to al-Qaeda or the Taliban to be tried before an American military commission.

The Iraqi court’s decision, however, comes as little surprise to the many American intelligence officials and lawmakers who expressed grave concern in December 2011 when, as the remaining American troops exited from Iraq, Daqduq was the last of 1,000 US detainees handed over to the Iraqi government.

That concern was pointedly expressed by Republican Senator Saxby Chambliss, vice chairman of the Senate Select Committee on Intelligence, who said, “Given Iraq’s history of releasing detainees, I expect it is only a matter of time before this terrorist (Daqduq) will be back on the battlefield.”

Those suspicions were heavily fueled by the Iraqi government’s stated promise that Daqduq would only be prosecuted on the single charge of illegalentry into Iraq with a forged passport, a charge which carried a maximum sentence of five years.

However, the Obama administration insisted that it had been assured by the Iraqi government that Daqduq “would be tried for his crimes,” criminality which included murder and terrorism.

Unfortunately, that assurance proved rather shaky in that it rested on an Iraqi promise that an investigative judge would consider the American allegations, a promise that apparently never materialized. As one intelligence officer said, “This is one of many things we just dropped,” adding that Daqduq “will go back to the Iranian terror machine.”

Daqduq’s participation in the Iranian terror machine had begun in 2005 when, as one of Hezbollah’s most experienced covert operatives, he was sentto Iraq to help the Iranian Revolutionary Guards Corps al-Quds Force (IRGC-QF) arm and train Iraqi Shiites to fight American and coalition forces.

At that time, the IRGC-QF was spending upwards of $3 million every month in an attempt to replicate the Hezbollah militia model by using its terrorist proxy to train small groups of Iraqi Shiites in what were termed “Special Groups.”

To that end, Daqduq, spent his time training the Iraqi Special Groups in Iranian training camps. There, he instructed his terrorist pupils in the use of mortars and rockets; kidnapping operations; and the manufacture and deployment of roadside bombs (IEDS).

In fact, Daqduq was an expert in the use of IEDs, in particular the IRGC-QF-designed Explosively Formed Penetrator (EFP), more powerful and deadly than ordinary IEDs. An estimated 10 percent of the 4,322 Americans killed in combat in Iraq since 2003 were victims by EFP.

In addition to his terror training schedule, Daqduq was also regularly sent by his IRGC-QF handlers on operational missions, which included the mission to attack the Provincial Joint Coordination Center (PJCC) in Karbala, Iraq, some 60 miles south of Baghdad.

As part of that operational mission, Daqduq was named chief advisor and liaison between the IRGC-QF and Qais al-Khazali, head of the Special Groups in Iraq and militia commander of Asaib Ahl al-Haq (AAH), the insurgent group charged with carrying out the Karbala raid on January 20, 2007.

In that attack, AAH gunmen riding in armored SUVs, wearing American-looking military uniforms and holding identification cards were waved through a PJCC checkpoint by Iraqi guards. Moments later, they exited the vehicles, throwing grenades and spraying the compound with small arms fire, killing one American soldier and wounding three others.

After the attack ended, the insurgents returned to their vehicles and sped off with four American soldiers as hostages, where their executed bodies were later found 25 miles away in and around several abandoned SUVs.

According to the American military account, two of the US soldiers were found handcuffed together in the back of one of the SUVs with gunshot wounds to the head. A third soldier was found on the ground dead with the fourth soldier lying mortally wounded nearby.

A few months later in March 2007, Daqduq, along with Qais al-Khazali, his brother Layith Khazali and other members of the assassination team, was captured by US forces in the southern Iraqi city of Basra.

It should be noted that in June 2009, the Obama administration released both Qais al-Khazali and his brother Layith in what was widely believed part of a negotiated hostage exchange for five Iranian-held British hostages captured in 2007.

The Obama White House, however, insisted the prisoner release was not tied to the British hostages but rather to further an “Iraqi reconciliation effort”with AAH, a version of events contracted by Iraqi government officials who noted that prisoner exchange negotiations had indeed taken place.

Perhaps not surprisingly, two weeks after the release of the Khazali brothers, the corpses of two of the British hostages were dropped off at the British Embassy in Baghdad. While a third hostage was released in December 2009, the whereabouts of the remaining two British hostages remain unknown.

Yet, while the Khazali’s were free to resume plying their terrorist trade, Daqduq remained in custody at America’s Camp Cropper prison in Iraq, his fate being debated over the course of two administrations.

While the Bush administration had wanted to try Daqduq in a US criminal court, the terms of the 2008 status-of-forces security agreement required the consent of the Iraqi government to transfer individuals into or out of the country. So, in an effort to not jeopardize the agreement by insisting on his extradition to the United States, Daqduq’s fate was handed off to the Obama administration.

For its part, the Obama White House wanted to prosecute Daqduq in a military commission on US soil, but Republicans wanted him prosecuted before a military tribunal at the Guantanamo Bay detention facility in Cuba.

Yet, the Obama administration rejected that point having said a trial at Guantanamo Bay would not be an option given the administration’s decision to not permit new detainees to be sent to the detention facility and “add to its population.”

In either case, the argument was made moot given that the Shiite-dominated government of Iraqi Prime Minister Nouri al-Maliki refused to allow Daqduq taken out of the country to stand trial, a refusal stemmed in part by reports that the Iranians and Lebanese had been in contact with the Iraqi government to secure Daqduq’s release once the US had left Iraq.

Unfortunately, that release has now been secured by an Iraqi court, a decision which will allow Ali Musa Daqduq to once again ply his murderous trade.