The Horrors Chen Guangcheng Leaves Behind 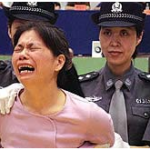 While blind Chinese dissident lawyer Chen Guangcheng and his family are reportedly free to leave China, millions of Chinese women are left behind to deal with the horrors of forced abortion and sterilization.

The diplomatic tempest between the United States and China that surrounded Guangcheng’s escape from house arrest — including the ineptitude displayed by the Obama administration in facilitating his release from China — has been well documented.

However, lost in the diplomatic uproar has been little detailed discussion of the actual issue that caused Guangcheng’s imprisonment in the first place: namely, his opposition to the Chinese government subjugating women to undergo forced abortions and sterilization in adherence to the country’s “one-child policy.”

Adopted in 1978 to curb China’s huge population growth, the one-child policy limits Chinese families to one child per couple. While the policy was initially proclaimed by the Chinese government to last only a generation, it has morphed into a permanent campaign of institutionalized violence against women and girls.

In addition to forced abortions and sterilization, that violence includes violators of the one-child policy — including whole families– sentenced to prison, forced labor camps, beatings, home arrest, severe fines, and loss of jobs.

Those abuses have been highlighted extensively by the Congressional-Executive Commission on China, a commission created by Congress to monitor human rights in China.

In its recent annual report, the congressional commission noted Chinese “official campaigns, as well as numerous individual cases in which officials used violent methods to coerce citizens to undergo sterilizations or abortions or pay heavy fines for having ‘out-of-plan’ children.”

For its part, the Chinese government has steadfastly denied that it is forcing women to submit to abortions and sterilization given that both activities are illegal under Chinese Law. However, detractors say those laws are often ignored by government officials whose promotions are tied with keeping birthrates low in adherence to the one child policy

Guangcheng shed light on that point in 2005 when he organized a class-action lawsuit against Chinese family planning officials in Shandong Provincefor forcing at least 7,000 women to undergo sterilization or late-term abortions in an effort to meet birth rate quotas mandated by the one-child policy.

For his efforts, Guangcheng was sentenced in 2006 to 51 months in prison before being released in 2010 and held under house arrest at his family’s farmhouse in Shandong Province, from where he recently escaped to find sanctuary at the American embassy in Beijing.

Yet, while the Chinese government may be upset over Guangcheng’s efforts to shine light on the seamier side of the one-child policy, it is quite happy to discuss the overall effects of the policy, which it considers to be a rousing success.

Specifically, despite today having the largest population on earth with more than 1.34 billion people, according to China’s National Population and Family Planning Commission, the one-child policy has been able to prevent more than 400 million births in China.

To achieve that goal, about 13 million abortions are performed nationwide each year, which translates to about 35,000 abortions per day.Unfortunately, the Chinese commission fails to note how many of those abortions were undergone willingly.

Perhaps that omission stems from the fact that many women want to actually keep their babies and will not give them up without a fight, an intransigence that necessitates Chinese authorities utilize other forms of persuasion, such as taking women by force, often kicking and screaming, to family planning clinics.

There, those women are strapped down to tables and forced to abort their babies, with the abortion procedures employed varying based on the age of the unborn child and the cooperation of the mother.

While in some cases drugs are administered that cause the baby to die and be removed, in other more horrifying cases babies which are at full term are forcibly pulled from the mother’s womb, an example of which recently emerged when a nine-month old infant was born alive and drowned in a bucket by Chinese authorities.

Yet, for some women lucky enough to survive the harrowing ordeal, they may have an IUD inserted into their bodies after the abortion to prevent future pregnancies and undergo examinations to ensure they have not become pregnant or have removed the IUD.

Still, as appalling as the ordeal undergone by these women to unwillingly abort their babies is the equally appalling practice of women willingly partake in gendercide, the sex-selective abortion of baby girls.

Specifically, given the historically and culturally high premium placed on the value of males in Chinese society — a belief highly exacerbated by the one-child policy — women will undergo private abortions to ensure a male newborn.

In some of these abortions, which are carried out by midwives, the midwife will strangle the newborns with umbilical cords and record the baby as stillborn or, failing that, abandon the female baby to the elements, left to die or raised as orphans.

Unfortunately, gendercide, according to one UN estimate, has resulted in the disappearance of 200 million women, mostly in China and India. InChina’s case, the use of gendercide has led China to now have approximately 37 million more males than women, a sex ratio at birth of 118 boys for every 100 girls.

One of the unintended consequences of that gender imbalance, according to a report by China’s state-run news agency Xinhua, is that, “millions of Chinese men of marrying age may be living as frustrated bachelors by 2020,” a frustration, not unexpectedly, which is driving the growth of sexual slavery in China.

Unfortunately, despite the valiant efforts of men like Chen Guangcheng, the suffering of millions of Chinese women doesn’t appear easing anytime soon. In fact, while Chen Guangcheng’s flight from China may have left his future in a state of uncertainty, their future is more clearly defined

That fate was perhaps best expressed by Reggie Littlejohn, president of Women’s Rights Without Frontiers, an organization that opposes forced abortion and sexual slavery in China, who said, while “Chen may be safe for the moment, the women for whom he risked everything are not.”