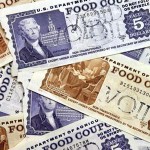 Despite a new Congressional Budget Office (CBO) report finding a record number of Americans receiving food stamps, the Obama administration is working overtime to enroll more people into a program increasingly rife with fraud and abuse

According to the CBO, a record 45 million Americans (one out of every seven people) are now receiving assistance from the Supplemental Nutrition Assistance Program (SNAP), a 70 percent increase in participation since 2007.

Since 2007 spending on SNAP has also ballooned from $30 billion to $72 billion, an increase of 135 percent.  Moreover, the CBO estimates that spending on the program will continue to increase to $82 billion by 2013.

Eligibility for SNAP, which is administered by the US Department of Agriculture (USDA) but whose benefits are distributed by the states, necessitates that a person’s income must be near or at the national poverty level.

As such, the CBO reports that roughly 65 percent of the skyrocketing growth in the number of participants and program costs can be attributed to a stagnant economy; 20 percent due to higher benefit amounts passed in the American Recovery and Reinvestment Act of 2009; and 15 percent from other factors, such as higher food prices.

Begun in 1964 as a temporary food aid program for low-income adults and children, the food stamp program has nevertheless exponentially grown to become more of a permanent entitlement with half of food stamp aid actually going to individuals who have received the aid for 8.5 years or longer.

While most of SNAP’s participants faithfully abide by the program’s guidelines, it’s not surprising to find that its dramatic growth has also witnessed a correspondingly high swelling in the number of cases of fraud, corruption and abuse by crooks and hustlers.

That sentiment was recently shared by USDA Inspector General Phyllis Fong when she testified in March before the House Committee on Oversight and Government Reform.

According to Fong, the USDA since 2007 has launched 779 probes that had resulted in 1,356 indictments, 944 convictions and 792 sanctions against individuals and businesses that had cheated the program out of more than $200 million.

The most common type of fraud, according to Fong, is food-stamp trafficking where retailers encourage food-stamp recipients to use their Electronic Benefits Transfer debit card to trade their benefits for cash, alcohol or cigarettes, an illicit activity that can garner the retailer up to $50,000 a month.

That type of fraud was on display when Pat Lu, a mini mart owner in Massachusetts, was recently arrested as the ringleader of a $700,000 scheme involving at least 53 suspects engaged in trading food stamp benefits for cash.

Over a period of two years, Lu would swipe a customer’s SNAP debit card, ring up a phony sale for the value of the card, give the customer 50 cents on the dollar in cash, and pocket the rest, netting Lu $30,000 per month.

However, uncovering that type of fraud has become increasingly problematic given that the USDA has only 40 inspectors to oversee the 231,000 retailers nationwide that have been approved to participate in SNAP.

For example, the USDA has each year since 2002 removed an average of 830 retailers for food stamp trafficking, including ousting more than 1,200 stores in 2011. However, a recent investigation found that of the 4,600 retailers from 2006 through 2011 who had been permanently disqualified from accepting food stamps, 1,492 continue to participate in the program.

Of course, crooked retailers are abetted by equally crooked food stamp beneficiaries, witnessed by myriad reports of food stamp recipients selling their SNAP benefit cards on Facebook and on Craigslist.

Moreover, in her appearance before the House Committee, Phyllis Fong testified that many food-stamp recipients also use proceeds illegally netted from their food stamp benefit to buy illegal drugs, weapons and prostitutes.

Unfortunately, thousands of people who are not eligible for food stamps are still able to get them by lying or using the social security number of dead people, an activity highlighted by a USDA report that found the states of Maryland and Virginia having distributed $130 million in food stamps in 2010 to individuals who were not eligible.

Not surprisingly, food stamp fraud is not relegated to aid recipients or retailers but extends to government employees charged with administering the program. Those cases include four employees of New York City’s Human Resources Administration arrested in 2011 for creating over 1,000 fake food-stamp cases over four years that netted them $7 million; and nine workers at Milwaukee’s County Enrollment Services Center accused of scamming almost $300,000 from the program from 2005 to 2010.

Yet, the Obama administration seems far less interested in preventing fraud and waste and more concerned about boosting food-stamp enrollment, given its stated belief that the SNAP program is “severely underutilized” by claiming that more than 33 percent of Americans are eligible to receive food stamps but have yet to apply.

To that end, it has vigorously funded multi-million-dollar federal initiative campaigns to promote participation in the SNAP program by, among other things, further relaxing food stamp eligibility requirements.

Specifically, the USDA has given millions of dollars of cash rewards to state and local governments as well as $75,000 grants to private non-profit organizations so they could develop projects that “simplify SNAP application and eligibility systems” and raise the amount of food stamp participants.

One of the recent winners in this initiative was the state of Oregon, which received $5 million in “performance bonuses” for its swift processing of applications, efforts which has seen the state achieve a 60% boost in the number of food-stamp recipients, more than 780,000 people.

For its achievement, Oregon was given a two-year grant to test an “innovative approach” to the food-stamp “client eligibility review process,” which grants state officials a waiver that allows them to grant the food stamp benefit without actually interviewing the applicant.

Of course, the efforts by the Obama administration to create a new dependent class neatly dovetails with its overall efforts to create an expanding welfare state, efforts which have seen the Obama administration since 2009 increase spending by 41 percent on the nearly 80 federal welfare programs that provide food assistance, housing, education services, child care, and medical care.

Those expenditures, which now stand at $668 billion, coupled with another $284 billion in state and local government expenditures, bring the total cost to nearly $1 trillion, making Welfare the fastest growing part of government spending with aggregate costs projected to reach over $1.5 trillion in 2022.

Those staggering outlays led Robert Rector of the Heritage Foundation at a House Budget Committee hearing to say Obama’s massive expansion of welfare-related programs are leading to “ruinous and unsustainable future budget deficits,” adding “Food Stamps are a symbol of that growth.”

Of course, the Obama administration takes a different view. As Agriculture Secretary Tom Vilsack said in August 2011, food stamps are part of the Obama administration’s jobs program, noting “When you talk about the SNAP program or the food stamp program, you have to recognize that it’s also an economic stimulus… If people are able to buy a little more in the grocery store, someone has to stock it, package it, shelve it, process it, ship it. All of those are jobs. It’s the most direct stimulus you can get in the economy during these tough times.”

Given that logic, the record number of Americans now receiving food stamps must certainly indicate that economic prosperity is nearly at hand.